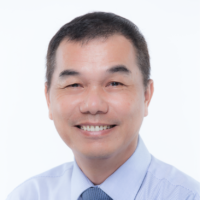 Teo Choon Chuan joined THKMC on 15 June 2017 as the Divisional Director for Administration and Projects. Prior to joining THKMC, he spent 10 years with the Ministry of Health, contributing to the emergency preparedness of public healthcare institutions. Prior to joining MOH, Choon Chuan was with ST Electronics for 3 years and the Singapore Armed Forces for 13 years. He was a dual-track officer who had held command and staff appointments in the combat and logistics formations in the SAF.

Choon Chuan obtained his Masters of Science (Defence Technology) degree from Cranfield University (Royal Military College of Science), UK, and Bachelor of Engineering (Hons) degree from Nanyang Technological University. He also obtained a Graduate Diploma in Financial Management and Certificate for Commercial Law from the Singapore Institute of Management and Temasek Polytechnic respectively.